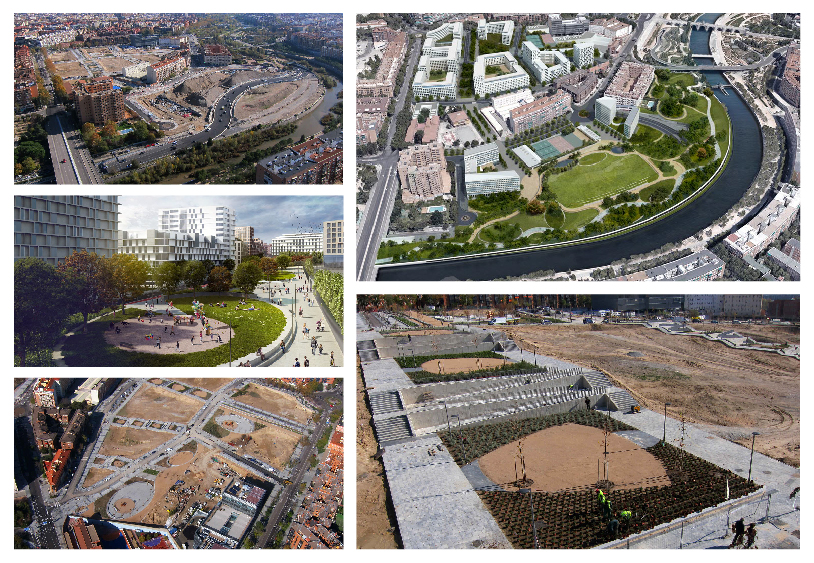 Ribera del Calderón is the new name of the area that, until now, was known as Mahou-Calderón. It was officially presented on November 18 by the mayor of Madrid who commented: “today is a day in which the Madrid of the future is built, the one we all want. A sustainable, livable Madrid that improves the quality of life of all Madrid residents. Ribera del Calderón exemplifies the urban development of our city. It is a privileged and emblematic enclave, which culminates the entire Madrid Río operation and which will continue with the coverage plan that will be undertaken throughout the year by the Madrid City Council, in collaboration with Atlético de Madrid ”.

Environmental sustainability is one of the main characteristics of La Ribera del Manzanares, the street lighting will be done with low consumption lights and there will be electric vehicle charging stations to, as the mayor has said, “to guarantee sustainable mobility within from the city of Madrid ”.

Regarding the planning of green areas, different varieties of species have been used, ensuring in all cases a correct adaptation to the climate and soil, so that water needs are minimized and adjusted to the usual standards used by the Administration.

The project has been conceived taking into account the current mandatory framework in terms of universal accessibility and the removal of barriers. The main routes of the green areas are designed to be accessible pedestrian routes, with a free band of passage of at least 1.80 m wide, slope not exceeding the maximum allowed of 6% and without projections or steps in its route.

The studio began to work on the design and urban planning of the Mahou-Calderón project in 2018. During all this time, it has worked together with the different neighborhood associations, the Madrid City Council and the Atlético de Madrid and Mahou entities in the definition of the urban environment of the area. Finally, after 2 years, the project is already in its final execution phase.

We begin the year by reviewing our 2019 activity.

On January 28th we participated in the talk-detabe about transgenerational housing on the occasion of the exhibit
SPAIN
T. +34 91 358 51 40
ebya@ebardaji.es